#NatureNow in the European Green Deal 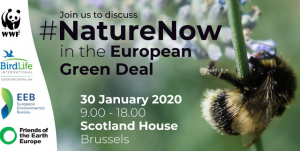 After some welcome remarks, Virginijus Sinkevičius, commissioner for the Environment and Oceans, elaborated on the current state of affairs regarding biodiversity in the European Green Deal. His talk was optimistic and motivation to work on this topic resonated in his own words: “let’s make biodiversity a buzzword in 2020!”. Ronan Uhel (European Environment Agency) and Sabien Leemans (WWF) then followed by reflecting on lessons learned from the past and what is needed in the new strategy. With buzzwords such as “ecological debt”, “harmonised monitoring”, “nature based solutions” and “implementation gap”, the scene was set for the panel discussions later on.

Delana Burkhardt (S&D, European Parliament), Aljoša Dupliç (Institute for Environment and Nature Conservation, Croatian Presidency), Stefan Leiner (DG Env, European Commission), Barbara Herrero (Birdlife Europe and Central Asia), Melina Sakiyama (Global Youth Biodiversity Network) and Ronan Uhel took part in the panel discussions. They briefly each presented their points of view in which the importance of compliance, nature based solutions and a system change towards an economy based on public services, common values and principles was agreed on by several of the panelists. Several of the panelists also shed light on the importance of mainstreaming biodiversity into current policies and creating SMART overall targets.

Stefan Leiner further talked about the role of the EU and mentioned that legally binding targets will take time due to the need to create legislation, that creating a SMART overall target for restoration could probably not be expected since it is difficult to create a baseline and find a good, consistent way of measuring progress, and that a lot will come down to member state ambitions, which will play a big part. Melina Sakiyama, next to calling for system change, furthermore talked about the role of youth in biodiversity governance as well as the responsibility to be fair and just to all generations, since we are not just talking about an ecological crisis, but also about job loss, health and so on.

The EU Biodiversity Strategy 2030 has been delayed by a month and will now be released by the end of March.