Skip to content
Join us
Home » Pollinators in Europe 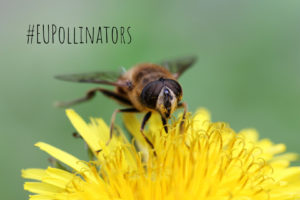 Pollinators present an important and diverse group of animals accross our planet. While many people immediately think of insects – which do represent the largest group of pollinators, animals such as birds, lemurs, bats and other small mammals can also be pollinators. They are basically any animal that moves pollen grains within a plant, or from one plant to another, and by doing this, pollinators play a vital role in one of the most important parts of the life cycle of flowering plants; fertilisation.

Humans are heavily dependent on this pollination, both for their food as well as for having functional ecosystems to depend on. Succesful pollination leads to the production of seeds and fruits, and subsequently reproduction. In the European Union alone, 78% of native flora and 84% of crops rely either partially or fully on the pollination by invertebrates. This last fact can even be expressed in money, it is estimated that pollinators contribute EUR 15 billion to the EU economy by just doing what they do best.

Pollinators contribute to healthy ecosystems in a multitude of ways. The most basic example is that they help with reproduction, which in turn results in the support and spreading of ecosystem services wild plants provide such as by pollinating plants that keep soil in place through their root systems, by pollinating plants that are a food source for animals and by simply supporting more plants to convert carbon dioxide into oxygen.

Nevertheless, scientific studies and monitoring efforts highlight a concerning trend in the abundance and health of pollinators. Recent assessments in Europe indicate that 9% of butterflies and 9% of bees are threatened and that their populations are in decline with 37% and 31% respectively (IPBES, 2016). A German study from 2017 furthermore found that populations of flying insects had declined by over 75% in just 27 years. However, much information is still lacking on the health and abundance of insects, which could mean that these numbers are only a small part of the story.

Pollinators are threatened by many human activities. Direct threats include land-use change, intensive agricultural management and pesticide use, environmental pollution, invasive alien species, pathogens and climate change. These drivers threatening the occurence and health of pollinators also pose a threat to the health of the environment and its services, such as our food resources.

To address the decline of wild pollinators in the EU, in June 2018 the EU Pollinators Initiative was launched, providing a strategy to tackle this issue. The initiative has three priority themes; improving knowledge on pollinator decline, causes and consequences, tackling the cause of pollinator declines and raising awareness, engaging society and promoting collaboration.

IUCN and the Institute for European Environmental Policy (IEEP) are the lead agents in a consortium of five partners that will implement this initiative through an EU-funded project running from January 2019 until December 2020. The project has four goals:

The project has already produced several meaninful results such as guidance on pollinator friendly cities and managing invasive alien species to protect pollinators. Furthermore, under the theme of mobilising knowledge, a workshop on “conservation measures that benefit pollinators applied under the Natura Directives in Natura 2000 sites” was held in 2019, as well as a conference on “halting the loss of pollinators – the role of the EU agricultural and regional development policies” in February 2020.

To raise public awareness, the project has started a communication campaign. The aim of the campaign is to “create [this] sense of communal responsibility and unity in the region and to elevate the cause of pollinator conservation”. A children’s campaign was already set up in 2019, 2020 will set the stage for a “communication campaign [that] aims to map the ongoing and future initiatives preserving pollinators across Europe being spearheaded by multiple stakeholders so that citizens can join and more effectively take action to help address the decline of wild pollinators in Europe”. Communication material can be found on this website and includes card games, posters, leaflets, postcards etc. To follow updates on this project, please follow the IUCN website,

Furthermore, the European Commission is now, in light of the Pollinators Initiative, starting an effort to map the current initiatives on pollinators in Europe. You can add your project by filling in this form (it only takes 5 minutes).

For the latest updates on the Pollinators Initiative, follow this page.

Do you want to do something to protect pollinators? The UN recommends several practices for farmers to create a good habitat for bees for example: