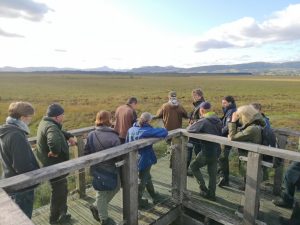 During the very exciting 3 days we had an opportunity to see some management of coastal change in salt marsh and dune habitat as a part of the Dynamic Coast work around St Andrews.

We have witnessed some very nice examples of peatland restoration at Flanders Moss and Blawhorn Moss, and visited a managed coastal realignment implemented by RSPB as a part of the LIFE EcoCo project. At the City of Glasgow we have had a chance to see some very interesting projects working on the establishment of urban green infrastructure. More about this kind of work in Scotland can be found here.