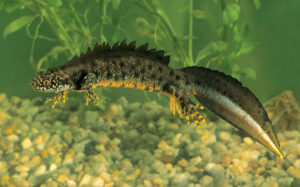 A new organisational licence for Woking Borough Council, in Surrey, will enable a long-term approach to the conservation of newts, ensuring efforts are focused on newt populations and habitat that will bring the greatest benefits to the species. It will also simplify the licensing process for developers where newts are present, saving them time and money.

Developers can now participate in the project that will see great crested newt habitat enhanced or created across the borough by the council prior to any development taking place. The new habitat will join up existing newt populations, making them more healthy and resilient.

“This is a victory for both the natural environment and developers. The new habitat provided by the council will ensure the newts benefit from development and at the same time developers avoid costs and risks of delay that have caused concern in many developments before now. This scheme shows we are working hard to ensure regulation better serves both the natural environment and the economy.”