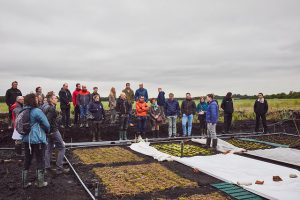 On 12 June the Interreg North West Europe Care-Peat project in which Eurosite is a partner, has officially kicked-off with a start conference at the Metropolitan University in Manchester, United Kingdom. It was an opportunity for participants to meet colleagues from all over North West Europe who are dedicated to conserve the valuable peatlands in the area. Participants were informed of the general project goal to maximise carbon sequestration and the various pilot peatland restoration sites the project identified. Within Care-Peat, these pilot sites are:

Furthermore, the conference provided an opportunity for other European projects working to restore peatlands to present their goals and progress. Attendees also participated in various workshops and joined a late afternoon field trip to the Little Woolden Moss restoration site. Please find more information concerning the project and its partners here.