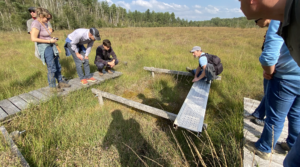 Eurosite participated in the NWE Interreg Care-Peat project partner meeting in Orléans, France, from 22-23 September 2021. Finally, after a long Covid break, it was possible to organise this meeting, be it in a hybrid form, including a real on-site visit. The meeting started by introducing the new project partners that joined by support from an extension granted in 2021 – the so-called capitalisation work package. New partners are the Van Hall Larenstein University of Applied Sciences (Netherlands), the University of Rennes (France), the North Wales Wildlife Trust (United Kingdom). Additionally there are also two associate partners that joined, which are the National Farmers Union of England and Wales (United Kingdom) and the Irish Nature and Hill Farmers Association (Ireland).

The meeting agenda included both hybrid workshops on GHG models and data analysis, as well as a field trip to La Guette peatland. Participants visited the restoration pilot site where topsoil is being removed to observe vegetation dynamics on a bare peat layer and also got to see long-term observation stations. The most valuable aspect of the meeting however was the possibility to finally be able to directly discuss the project, its implementation, the role of peatlands in carbon storage, and ways of analysing carbon flows. We would like to thank the University of Orléans for their hospitality.