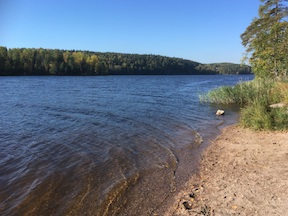 On 25 and 26 September, the Eurosite Annual Meeting 2017 was held in Espoo, Finland. Generously hosted by our member Metsähallitus Parks & Wildlife Finland, the largest part of the programme took place at Haltia – the Finnish Nature Centre, located in the beautiful Nuuksio National Park.

The meeting was officially opened by Eurosite President Stefan Versweyveld, Stig Johansson (Director of international affairs, Metsähallitus Parks & Wildlife Finland) and Aulikki Alanen of the Finnish Ministry of Environment, followed by an inspiring speech on Twinning by our Board member Anita Prosser. The rest of the day was divided into two themes – Innovative funding mechanisms for Natura 2000 areas in the morning, and Habitat banking and ecological compensations in the afternoon. Both parts were composed of speeches on fascinating topics, such as investing in natural capital, the local socio-economic impacts of national parks, funding strategies, ecological compensations and alternative land-use options for degraded peatlands, which led to interesting discussions. Presentations of speakers can be found on our dedicated event page. The day finished with the presentation of three new Eurosite Twinning Agreements and our traditional EuroCocktail.

The second day was kicked off with the Eurosite Annual General Meeting, in which the members officially approved the 2016 Annual Report, our new Statutes and the budget for 2018. Subsequently, the Council members for the period 2017-2020 were appointed. This year, we welcomed new Council members Kevin Feytons from Belgium, Carlotta Maggio from Italy, Alžběta Čejková from the Czech Republic, Mălin-Matei Muşatescu from Romania, and Philip Eckersley from the United Kingdom. Stefan Versweyveld was re-elected by the new Eurosite Council for his second term as President. He will continue to guide us in the coming three years, which will include exciting new projects and our upcoming 30th anniversary in 2019. We also welcomed Kyriakos Skordas to the Eurosite Board.

After the Annual General Meeting, all participants were invited to a field trip in the Nuuksio National Park where Marja Hokkanen from Metsähallitus Parks & Wildlife Finland guided us through the forest. A beautiful walk through the park was followed by a coffee break in a Finnish hut in the middle of the woods, which was called the ‘Green Window’. A group picture with all participants was taken at this memorable site. Upon returning to the hotel, the Eurosite Wetlands and Climate Change Working Group and the Eurosite Economics and Ecosystem Services Working group had a very fruitful joint meeting in which promising plans were made for the next year(s).

We would like to thank all speakers, participants and people who contributed to our Annual Meeting in another way, with a special thanks to our hosts from Metsähallitus Parks & Wildlife Finland.