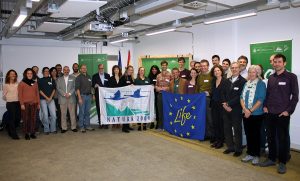 To many, the first thing that comes to mind are financial incentives. However, it turned out the motivations were manifold, ranging from conservation ideals to sentiment and tradition. Interestingly, studies have shown that financial motivations often rank at the bottom of the list of reasons why landowners get engaged in private land conservation. During the workshop this was confirmed with both the results of a global level scientific research and a practical example from Burren in Ireland.

By learning about examples from outside of Europe (i.e. tax incentives and ballot measures in the United States), the workshop provided the opportunity to discuss if similar incentive mechanisms could potentially work in Europe as well, and whether a network such as ELCN could help to realise this.

The workshop was hosted by LIFE ELCN project partner Fundacion Biodiversidad at their premises in Madrid, Spain, and was attended by 39 participants from 12 countries.