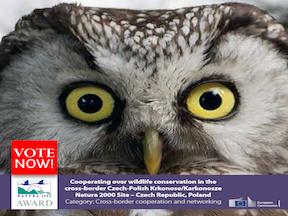 Eurosite member Krkonose Mountains National Park is one of the finalists for the prestigious Natura 2000 Award.

From the Natura 2000 Award website (where you can support Krkonose with your vote):

As with many natural areas divided by borders, the effective management of Krkonoše Mountains and its valuable mosaic of tundra, forest and meadow habitats, as well as a unique mixture of arctic/alpine and mountain/lowland species has been obstructed by poor, outdated and incomparable data.

As a response to this problem, and to promote common conservation objectives, the competent administrations of both sides of the border have come together and implemented a suite of joint and well-coordinated actions. Joint teams for monitoring mammals (including bats), birds, and butterflies over an area of 962 square kilometres were established. Each of these teams involved specialists from many Polish and Czech scientific institutes, including the two Academies of Science and universities. Standardized monitoring methodologies (including field mapping, inventory, census, bat detection, telemetry, data modelling) were deployed.

A common database on birds was developed and the data collected was uploaded on a common platform, which enables geo-referenced analysis. The actual distribution, population sizes and long-term trends of breeding bird species are now better known. Regarding butterflies and bats, for the first time ever in Krkonose, the distribution and relative abundance of the different species were mapped; bats were studied in all habitats whereas day butterflies were selectively monitored in meadows and grasslands. Data on spatial distribution and cross-border migration of red deer were also obtained.

Based on the joint monitoring, a set of common management actions were identified and then incorporated in the management planning with the objective of securing the protection of Natura 2000 bird species, for instance by leaving parts of the forest unmanaged for the benefit of the Red-breasted flycatcher (Ficedula parva), and delaying the mowing of montane meadows for the benefit the Corncrake (Crex crex) and key butterfly species. It also aimed to preserve the most valuable habitats for bats in sparse beach forests and effectively regulating red deer populations to reduce damage to the beach forest habitats.

Thanks to this cross border cooperation and the major data gathering exercise, common conservation objectives for the Natura 2000 sites across both sides of the mountain range have been established.”

The Eurosite Team is very happy for Krkonose Mountains National Park and congratulations on your well-deserved nomination!