Looking back on the 3rd Natural Climate Buffers Study Tour 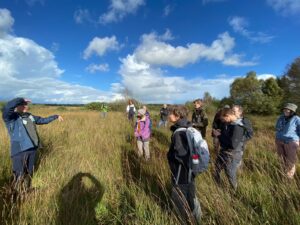 From 27-29 September, a group of 19 international site managers and 58 Irish stakeholders gathered for the third edition of the Natural Climate Buffers Study Tour which this time took place in Ireland. Organised by Eurosite, hosted by the Community Wetlands Forum and supported by Eurosite member the National Parks and Wildlife Services as well as the Environmental Protection Agency, the group visited four sites were Natural Climate Buffers are implemented. The tour showcased the strides being taken by Ireland to mitigate climate change via Nature-based Solutions at four key Natural Climate Buffer sites: Clara Bog, Scohaboy Bog, Cabragh Wetlands, and Abbeyleix Bog. Clicking on the links will provide more information on how these sites function as Natural Climate Buffers by means of informative factsheets.

Natural Climate Buffers are areas where natural processes are given space. As a result, they evolve with climate change, adapt to it and can play a vital role in retaining and collecting water (thus preventing the floods or water shortages), tempering heat and reducing carbon dioxide in the atmosphere. Healthy peatlands can function as Natural Climate Buffers, and are one of the most important habitats in Ireland, for carbon, climate and people; a fact which is increasingly recognised through investment, community action and political support. Ireland now hosts a vibrant peatland restoration network, across LIFE funding streams, the investment of carbon tax revenues and direct government support. Aside from the unique biodiversity this protects, these efforts are promoting a ‘Just Transition’ from peat harvesting, whilst ensuring that community dividends accrue, whether in the form of boardwalks, diversified employment, or mitigation of the long-term effects of climate change.

Where the group visited the Cabragh Wetlands and Scohaboy Bog on Monday, and Clara Bog and Abbeyleix Bog on Tuesday, on the morning of Wednesday 29 September, a workshop took place to reflect on knowledge and information gathered during the first two days of the tour. Participants were divided into break-out groups discussing how to break the cycle of merely talking and identifying barriers regarding Nature-based Solutions towards taking implementation action. For this purpose, attendees were asked to read a paper by the ENCA and EPA Networks on recommendations for overcoming barriers to mainstreaming the delivery of Nature-based Solutions in advance. We were honoured to have the Irish Minister of State for Heritage & Electoral Reform Malcolm Noonan as well as the Minister of State in the Department of Agriculture Pippa Hackett with us throughout the complete workshop, and we would like to express our thanks for their attendance as well as their inspiring speeches. What many international participants found equally inspiring however was the engagement of the large amount of volunteers at the visited sites who, together with other local stakeholders such as farmers and scientists, ensure the sites are restored and taken care off. Finally, we would like to thank everyone who, in any way, contributed to making the third edition of the Natural Climate Buffers Study Tour a success. A more elaborate study tour report as well as a detailed workshop report will be available on the dedicated event page soon.