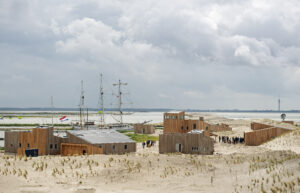 Eurosite member Natuurmonumenten (Dutch Society for Nature Conservation) is restoring one of the largest freshwater lakes in Western Europe by construcing islands, marshes and mud flats from the sediments that have accumulated in the lake in recent decades. This area, called the “Marker Wadden”, will form a unique ecosystem that will boost biodiversity in the Netherlands.

At the Markermeer, sediments are used to construct spawning areas, islands and natural shores such as wetlands and beaches. By reconstructing these habitats, endangered plants and animals can  recolonise the area. The aim is that by restoring the lake, a robust ecosystem is created in the heart of the Netherlands. This area will play an important role in the (inter)national ecological network of habitats and species, but will also be attractive for water sports and nature lovers. It is one of the biggest nature restoration projects in western Europe, restoring an area of up to 100 square kilometres.

Over the last twenty years, the Markermeer ecosystem has been deteriorating dramatically. The loss of flushing by the sea and rivers has caused significant siltation of the lake, the mud on the bottom of the lake is suffocating bottom-dwelling organisms, turbidity from suspended sediments has reduced primary production and the lake barely has any natural shores or shallow littoral zones. Because of this, this has not only affected plants and fish, but also many water birds.

On 2 July 2020, the Marker Wadden opened a completely sustainable and self-supporting settlement. At this unique off-the-grid settlement, a first in the Netherlands, electricity is generated on site with solar panels and a windmill as a reserve source and water comes from a local source and is removed and purified on site. The island is not connected to the national network of electricity, gas, drinking water or sewage. High-quality architectural buildings colour the island and are available for management and supervision, research by naturalists, receiving visitors and recreational rental. The size of the buildings on the island is limited and does not exceed 0.1% of the surface of the islands of the Marker Wadden.

If you want to know more about this unique project, please visit the project website.