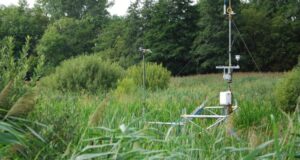 Since summer 2020, an extraordinary construction has been set up in the Polder Camphuis fen near the Dutch city of Groningen, in the very northern part of the Netherlands. Researchers of the Wageningen University & Research (WUR) measure greenhouse gas fluxes to calculate how much is captured and how much of that is released into the atmosphere.

Measurements
In peatlands such as the Polder Camphuis, bog plant residues remain in the soil, creating a peat layer that consists mainly of carbon compounds. Dried peat soils oxidise and release CO2. Rewetting the peatland reduce these emissions and stimulates fen and marshland vegetation: more plants grow and they absorb and capture CO2 from the air. Simultaneously, this rewetting can also cause extra emissions of the strong greenhouse gas methane. It is not yet known how large these effects are and under what circumstances they exactly occur. Eurosite member Natuurmonumenten hopes to discover the answer to this question by taking measurements in cooperation with researchers from WUR.

To be able to carry out all the measurements, but also to relocate the measuring equipment from the Polder Camphuys to the neighbouring marshland reserve the Onlanden and vice versa, a group of selected Natuurmonumenten volunteers is a great support to the researchers, once again highlighting the incredible value of volunteers in nature conservation.

Natuurmonumenten areas
Natuurmonumenten is worried about climate change and its consequences for nature, biodiversity and people. Natural conservation sites such as the Polder Camphuis and Onlanden are Natural Climate Buffers: areas with space for natural processes. As a result, such areas evolve with climate change, adapt to it and can play a vital role in retaining and collecting water (thus preventing the floods or water shortages), tempering heat and reducing carbon dioxide in the atmosphere. These measurements will be continuously carried out over the next three years. Outcomes of the research could result in recommendations for site managers of peatlands and bogs.

The research and restoration of the sites have been made possible, in part, by the Dutch Ministry of Agriculture, Nature and Food Quality in the framework of the policy-supporting research theme on climate-smart forest, nature and wood management.