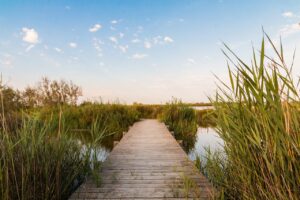 Together with our Dutch member Natuurmonumenten and the Natural Climate Buffer Coalition (Dutch acronym CNK), Eurosite held a workshop about natural climate buffers at the IUCN Global Congress in Marseille on Tuesday 7 September 2021. Eurosite Director Harm Schoten chaired this hybrid meeting, which was attended by 30-40 participants, in-person and online.

Jos de Bijl presented research on ‘natural sponges’ caried out in cooperation with Wetlands International. The research is focused on small-scale natural water retention in the capillaries of the Rhine watershed and its large-scale effects on buffering extremes in the water discharges more downstream watershed in the river. With the dramatic floods in Germany, Belgium and the Netherlands still in mind, this growing knowledge was eagerly taken up by the workshop’s audience.

The workshop participants concluded that authorities should adopt these nature-based solutions as the first scenario for climate adaptation and mitigation measures, which can only be realised if authorities and enterprises transfer from sectoral to integral thinking. This is slowly becoming policy in some countries, but is not common practice yet. This was a frequently recurring conclusion at the IUCN congress, where mainstreaming nature-based solutions was one of the main topics.

The workshop was live-streamed, and a recording is available here.

Additionally, all presentations of the session are available in one document.