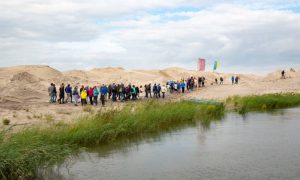 Eurosite member Natuurmonumenten (Dutch Society for Nature Conservation) has restored one of the largest freshwater lakes in western Europe by constructing islands, marshes and mud flats from the sediments that have accumulated in the lake in recent decades. These ‘Marker Wadden’ form a unique ecosystem that will boost biodiversity in the Netherlands.

Lake Markermeer (700 km2) used to be part of the Dutch Zuiderzee (a shallow bay that in English translates to ‘Southern sea’), but is now cut off from the North Sea and rivers by dams, dikes and reclaimed land. The lake has barely any natural shores, and its waters are often extremely turbid as wind and waves churn up the accumulated sediments from the relatively shallow lake floor (2-4 m deep). As a result, fish and bird populations have declined dramatically, a sad given that will hopefully be reversed with the creation of the Marker Wadden.

On Saturday 8 September the Marker Wadden were officially opened for the public by the Dutch Minister of Infrastructure and Water Management and the Deputy of the Province of Flevoland. The Marker lake has become a new recreative destination with a harbour, beach, and various hiking trails. Additionally, visitors have the possibility to enjoy birdwatching from one of the many bird watcher’s huts or the observation tower.

More information on the Markerwadden can be found here (in Dutch).

Video of the opening of the Marker Wadden.