Skip to content
Join us
Home » One Site, One Plan. Integrated Conservation Management 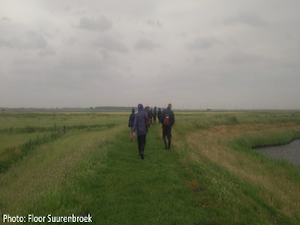 At the beginning of June, the two-day conference ‘One Site, One Plan’ on integrated conservation management took place in Amersfoort, the Netherlands, organized by Natuurmonumenten, Staatsbosbeheer, Natural England and Eurosite.

Day 1: 7 June
The event was kicked off by Ms. Mascha de Brouwer from Staatsbosbeheer, followed by an inspiring talk from Mr. Mike Alexander on adaptive management for nature conservation. Mr. Alexander provided a clear insight in why adaptive management is essential in management planning in a highly fascinating manner, drawing from personal expierence and anecdotes. Mr. Alexander’s presentation was succeeded by an introduction to Conservation Management System international (CMSi) given by Mr. David Mitchel from exeGesIS. He gave a demonstration of the CMSi software, showing how it enables and supports organisations to implement adaptive management.

After a lunch break, the conference continued with several parallel sessions on the four themes:

Presentations were followed by lively discussions, providing participants with an opportunity to share experiences on theory and practice, including valuable pointers on preparations and what to look for.

The first conference day was brought to a close with Eurosite’s traditional EuroCocktail, a networking opportunity in which participants share their country’s traditional bits and bites.

Day 2: 8 June
The second conference day evolved around the morning and afternoon excursions. The excursions served as opportunities to experience the practical aspects of the theory presented during the first conference day. Depending on which parallel session was attended on day one, participants joined field trips to the Almeerderhout, a large forest area surrounded by the city of Almere; Eemland, one of the best meadow bird reserves in the Netherlands; the Naardermeer, the oldest nature reserve of Natuurmonumenten; or Schaep en Burgh, a historical site and the head office of Natuurmonumenten.

More information on the workshop and presentations can be found here.