The coastal zone as a multifunctional habitat for birds 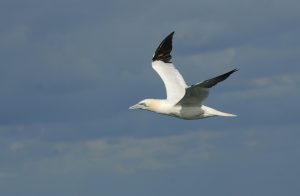 The saltmarshes that dominate the coastal area of the Axios-Loudias-Aliakmonas delta create islets within the flooded grounds which offer shelter during the breeding season for species like the Black-winged stilt (Himantopus himantopus), the Avocet (Recurvirostra avosetta), the Kentish plover (Charadrius alexandrinus) and the Little tern (Sternula albifrons). Also, Shelducks (Tadorna tadorna) lay their eggs in sandy places at the embankments which are located peripheral to the coastal zone.

Monitoring the colonies of herons, gulls and terns and the nesting of waders is of prime importance and this year, 2,004 nests were recorded in the mixed colonies of herons at the islands of the Axios River, while the nesting of Caspian tern (Sterna caspia) has been confirmed at the islets of Axios Delta. Also, the Northern gannet (Morus bassanus) – a very rare species in Northern Greece – has been recorded flying over the Axios coastal area for the first time ever!

An artificial platform – using trunks and plastic barrels and covered with pebbles – was constructed and placed in the Gallikos river estuary to help terns breed. During this year’s reproduction period, there were 30 nests – mainly of the gull-billed tern (Gelochelidon nilotica) – recorded on the platform. Facing severe erosion incidents that sweep away small coastal islets that serve as safe nesting habitats for gulls and terns, seabirds can benefit a lot from management actions such as the placement of artificial nesting platforms.

This pilot conservation effort was made possible thanks to the initiative of Hilary Koll and Steve Mills, from http://birdwing.eu/. The National Park of Axios-Loudias-Aliakmonas Delta is a Eurosite member.