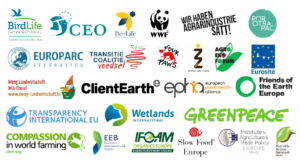 Together with other European NGOs and with our member the Naturschutzbund (NABU) Deutschland taking the lead, an open letter was sent to the European Parliament, the Executive Vice-President of the European Commission Frans Timmermans, the EU Commissioner for Agriculture and Rural Development and the CAP rapporteurs today, calling on them to ensure the transparency of the Common Agricultural Policy’s trilogues process.

“The CAP is of critical importance to the success of the European Green Deal, including the ‘Farm to Fork’ and Biodiversity Strategies. Given its volume of 387 billion € of EU taxpayers’ money until 2027, it is a matter of significant public interest, therefore extended transparency of the decision-making process should be the norm for all discussions on these files. Trilogues form a regular part of the EU decision making process and are applied to 70-80% of EU legislative procedures. Yet the level of transparency normally falls significantly behind that of other proceedings in the EU Institutions, especially in the European Parliament. Such a lack of transparency in trilogue negotiations has repeatedly been a point of discussions, subject to investigation by the EU Ombudsman and rulings by the European Court of Justice.”