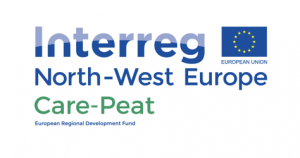 On 7 January, a press statement was disseminated announcing the following:

“Two recent initiatives by the Irish Government signify a sea change in Irish Peatland policy to tackle climate change, to provide green jobs and to improve biodiversity in Ireland at the start of the UN Decade of Ecosystem Restoration 2021-2030”, according to Niall Ó Brolcháin of NUI Galway, the policy lead of the EU Care Peat project involving 5 European countries (IE UK NL BE FR).

The announcement by the Department of the Environment, Climate and Communications that Bord na Móna will be rehabilitating c33,000 hectares of Peatlands has been followed by the announcement that Ireland will now be fully reporting greenhouse gas emissions and removals from managed wetlands ahead of the official EU target.

According to Niall Ó Brolcháin, “This is a much needed shot in the arm for peatland restoration and rehabilitation in Ireland, a country where more than 20% of our land area is peatland. It is also a boost for Europe which has the 2nd largest GHG emissions from Peatlands after Indonesia. Around 5% of global GHG emissions come from degraded Peatlands which cover only 3% of the global land area. In terms of initiatives to reduce Green House Gasses, Ireland can go from worst in class to best in class fairly quickly if we continue to focus strongly on Peatland restoration”.

“Irish peat bogs hold nearly 4 times as much carbon as the equivalent area of tropical rain forest and twice as much as giant coniferous forests. Our peat bogs are a perhaps a hidden national treasure”, said Niall Ó Brolcháin.

“This could be a very positive initiative for the farming community. Paludiculture (peatland agriculture) is likely to be included in the new Common Agricultural Policy along with other initiatives to support farmers who wish to rewet their peatlands. More positive initiatives are likely to be coming down the tracks as part of the EU Green Deal. It’s time to stop focussing solely on reducing the national herd and to start focussing more on peatland restoration”, concluded Niall Ó Brolcháin.

Jane Madgwick, CEO Wetlands International
“Wetlands International congratulates the Republic of Ireland for taking the step of including managed wetlands in their carbon accounting. By recognising and counting the impacts of peatland exploitation, space is created to start recovering their natural values, including the vital role of peatlands in the carbon cycle.  We are ready to support Ireland to turn this knowledge into action, restoring amazing peatlands to benefit people and nature for the long-term.”

Jan Peters, Greifswald Mire Centre, Germany
“We strongly welcome the higher recognition of managed wetlands, among them especially peatlands, by the Government of Ireland by including them into the national GHG reporting from 2021 onwards as a voluntary step. Peatlands represent the largest terrestrial carbon store, in Ireland, Europe and worldwide. They are super nature-based solutions for climate change mitigation, but also for other environmental services. They can contribute to achieve Ireland’s multiple targets towards the EU Climate change policies and the Green Deal strategies”.

“As the majority of drained peatlands (bogs and fens) with highest emissions are organic soils under agricultural use and can be found in the categories “Managed Cropland” and “Managed Grassland”, which will be mandatory to report from 2021, we would like to urge the Government of Ireland to follow the up-to-date guidelines of the IPCC for GHG emission reporting from wetlands, the 2013 IPCC Wetland supplement”.

“Latest analysis of the Irish national emission inventory showed that incomplete activity data is used for organic soils in these land use categories which misses out significant parts of Irish peatland/organic soil areas. Despite organic soils’ GHG emissions are earmarked as key categories, lower quality emission factors are used in Ireland so far. No country-specific emission factors and methodology  (tier 2 or 3) are applied in Ireland, which is good practice according to IPCC guidelines for key categories”.


On behalf of the EU Interreg Care Peat Project