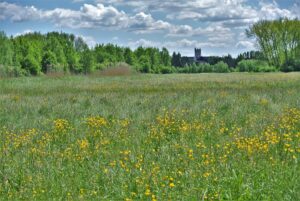 Eurosite member Natuurpunt, in cooperation with Ecover, has set up a project called Wetlands4Cities. After winning the “Fertilize the Future” award from Ecover in April 2021, the project was established and aims to develop at least five urban wetlands in Flanders over the next two years.

The project focuses on areas of at least 10 hectares that are located near cities with a population of at least 50.000. In the summer of 2021, a selection of project areas to prioritise was made. To ensure geographic coverage throughout Flanders, project partners selected at least one area per province.

Natuurpunt works together with various partners. Companies such as PepsiCo are doing water replenishment in the Uitkerse Polder. Private landowners and local governments are opening up their areas to, together with Natuurpunt, take measures to prevent flooding. Furthermore, Natuurpunt also works together with the Flemish Region, additionally strengthening and restoring wetlands through the Blue Deal. However, above all, most cooperation will be via the local Natuurpunt branches that are often composed of committed volunteers with a passion for and knowledge of local nature reserves.

Amongst the measures taken as part of the project concern opening up and creating access to urban wetlands in Aalst and Dendermonde. The water level in a polder area that contains peat will be raised to store additional CO2. Moreover, a wetland in Mechelen will be connected to the river Dijle to prevent drought in the area. Soil will be excavated to create extra wet nature.

Linked to this project, Natuurpunt also participates in a citizen science project led by the University of Antwerp in cooperation with the Flemish newspaper ‘De Standaard’. Measurement locations in 50 Natuurpunt areas are planned, including the Wetlands4Cities areas in Antwerp. The research focuses on heat and drought. However, due to the extremely wet summer of 2021, a switch in focus was made to buffering and sponge effects of the soil.