Skip to content
Join us
Home » What does the future hold after five years of twinning?

What does the future hold after five years of twinning? 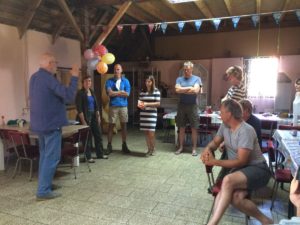 Blog post by Jacob de Bruin, Natuurmonumenten
The first weekend of June 2016, eight ecologists of Natuurmonumenten visited the Odra Delta. The objective of the trip was to evaluate nature conservation and the twinning over the previous years.

On 7 October 2005, a dream of Kazimierz Rabski of the Society For The Coast (EUCC Poland) became reality. This was the date of the official opening of the first major nature reserve in Poland that is not owned by the state, but by an NGO.

Over the last ten years, with a lot of support from the Netherlands, the Polish division of the Coastal Union EUCC has managed to purchase an area of over one thousand hectares. Their first purchase was the island of Lysa, a gift from the Dutch television programme Vara’s Vroege Vogels, using money from the Prins Bernard Cultuurfonds. Next, the Row peninsula, Czarnocin, the Bielawki islands and the Podgrodzie peninsula were acquired with financial support from the Ministry of Agriculture, Nature and Food. Bicycles were donated by the Dutch national park De Hoge Veluwe. A programme was set up to get the local population involved in the project. Natuurmonumenten donated 12 Scottish Highland cattle and offered assistance by giving management advice. From 2009, breeding birds are being monitored by volunteers and staff of Natuurmonumenten. Would EUCC Poland be able to follow the example of Natuurmonumenten? The Dutch NGO Natuurmonumenten has managed to secure over 100,000 hectares of nature in the Netherlands.

“It was my first time in the Odra Delta and for me the area represents the original Dutch landscape of decades ago, showing me what I would like to achieve back home. I saw right away possibilities for nature conservation in the Netherlands. Nature conservation in a way that is not achievable anymore, because of the expanse of the nature areas in Poland and the extensive agriculture around those valuable areas. But it motivated me even more to manage my site well and fight for the Dutch nature.”
Rosalie Martens, Site Manager Natuurmonumenten

The first weekend of June 2016, eight ecologists of Natuurmonumenten visited the Odra Delta. The objective of the trip was to evaluate nature conservation and the twinning over the previous years. For me, it was the fifth time I visited the area. My previous visits had been hard work. Two days of travel and two days of counting. During this visit there was more time to get to know the area and the people.

One of the first things we noticed when we entered Poland was that the grass had not been mowed anywhere, while in the Netherlands, we are getting ready for the second cutting of the season. The Polish fields are larger and are used more intensively, but we did not see any signs of the industrial character of agriculture that is common in the Netherlands. Nature is not confined to nature reserves, but is everywhere. This is no longer the case in the Netherlands. Everywhere, we see corn buntings, red-backed shrikes, whinchats and even a hoopoe. We start to feel that we need to warn Poland not to make the same mistake we did! 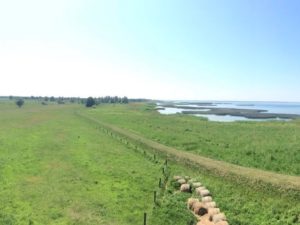 On the first day we visited Czarnocin, a former polder of the “kolchoz” – a large-scale collective farm in the Soviet era – with a marshland forest. In the days of the kolchoz it would have been home to 2000 cattle. Now, there are Konik horses and Scottish Highland cattle on the property of EUCC Poland and the fields are extensively mowed by private individuals in return for European agricultural subsidies. The area is still being drained, which is a pity because a high water table in winter and spring would lead to many improvements. Kazimierz is still involved in negotiations to raise the water table in EUCC properties. We fully agree about the many opportunities this would bring!

On the second day we had a workshop. The objective of this workshop was to outline the conditions for nature conservation in both countries and then define targets for future cooperation. First, a presentation was given by two staff members of Landscape Parks in the region. There are many nature reserves in this part of Poland. We soon discover that it is not easy to find out which party is responsible for nature conservation. We fully agree with a comment made by the Polish forest ranger: “The Polish population is sitting on gold, but they are not yet aware of this”. The “gold” is the rich nature this country has retained, but many people in Poland do not see the value of nature. 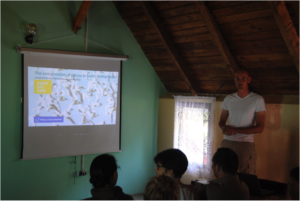 Next, I am given the opportunity to talk about nature conservation in the Netherlands. I tell them how it all started for Natuurmonumenten. About the fact that 111 years of nature conservation have resulted in the acquisition of 100,000 ha of nature. And that we have 743 employees, in addition to 8662 volunteers. I also talk about the millions we receive in subsidies from the government in support of nature conservation. And that we receive millions from the lotteries. The Poles smile timidly as they are told all this information. The last piece of information I had to give them is that we are one of the most densely populated countries in Europe and that no country in the world produces as much animal manure as the Netherlands.

The contrasts have now become quite clear.

But I also point out the similarities. Both countries have polders and marshlands, both of which are very rare in Europe, and we share a major responsibility for bird species such as the black-tailed godwit, the oystercatcher, the shoveler, the spoonbill, the bluethroat and the bearded reedling. I also show them how important these polders and marshlands are for storing water and their importance to the inhabitants of the Netherlands as areas for recreation and habitation. Finally, I try to warn them by showing them all the birds we have lost in the Netherlands as a result of intensified utilisation of the land. I finish with a positive slide, because some species have returned, for example the sea eagle, the crane, the raven and recently the osprey.

We end the workshop with a discussion on how we can help each other. Natuurmonumenten would like a broader set-up for the cooperation, with more involvement of the staff in this twinning. In the Odra Delta our staff could get a picture of what nature was like in the Netherlands many decades ago. We would also be able to see what makes nature in the Netherlands so special. One soon discovers that the Waddenzee, our polders and marshlands are unique and of crucial importance.

The Polish nature conservationists would like to learn how to manage and monitor nature. But they would also like to know how Natuurmonumenten succeeded in protecting so much nature in the Netherlands. Perhaps EUCC Poland could preserve more nature by means of acquisition, the way Natuurmonumenten started, way back in 1905.

At the end of the summer, we will work out further details for the collaboration and define common goals. This may include drawing up a new management plan, continuing with bird monitoring, and exchanging employees and volunteers. I expect that, in the next couple of years, we can be of great service to each other in terms of inspiration and new insights.