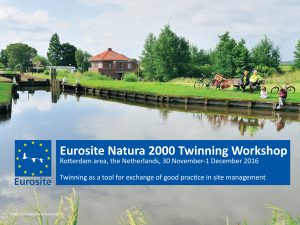 Eurosite and its member organisation Natuurmonumenten, ELO and ECNC are organising a workshop on twinning, as part of the Natura 2000 Biogeographical Process. Twinning is a structured collaboration between people from two natural sites – NGOs, private land owners and governmental organisations – allowing synergies, joint working and learning for the benefit of Europe’s nature. Natura 2000 site managers and the European Commission see an important role for twinning to improve site management practices, however a structure behind the concept is required.

During this twinning workshop you and the other participants will design a (new) Natura 2000 Twinning Framework, taking forward the experiences from Eurosite, ELO, ECNC and other existing twinning programs. This Framework will capture the outcomes and lessons learned from cooperation between Natura 2000 sites and also make them accessible to the wider site management community.

By contributing to this workshop, you can make sure that the Natura 2000 Twinning Framework addresses your needs.

The concept of twinning European cities is already well known, now Eurosite and partners aim to make the twinning of natural sites just as widespread and talked about.

08.15 to 09.30 Transport to venue. Bus departs at 8.30 from Rotterdam Central Station: please be on time!
09.30 to 09.45 Welcoming words by Stefan Versweyveld, President of Eurosite
09.45 to 10.00 Message from the European Commission, by Kristijan Civic, Eurosite
10.00 to 12.30 Presentations about the history and future of twinning and current good practice examples
– Nicole Nowicki, co-founder of Eurosite Twinning Programme
– Patrick Nuvelstijn, Natuurmonumenten
– Alec van Havre, on behalf of ELO and Landelijk Vlaanderen
– Michel Gerits, City of Antwerp
12.30 to 13.30 Lunch
13.30 to 15.30 Presentation and workgroups to discuss a future Natura 2000 Twinning Framework
– Anita Prosser, Akta Partnership
– World Cafe work session
15.30 to 16.00 Break
16.00 to 16.20 Presentation by Wouter van Steenis, Natuurmonumenten: the Tiengemeten Case
16.20 to 17.00 Workgroups continued and conclusions day 1
17.00 to 19.00 EuroCocktail
19.00 to 19.30 Transport back to Rotterdam Central Station
20.00 to 22.00 Optional dinner

Nicole Nowicki, co founder of the first European Sites Twinning Programme, first Eurosite president and former Director – General. Through Eurosite, Nicole has been involved in the development of Natura 2000, representing site management organisations at the European level. She was promoted as Knight of the National Order of Merit by the French government in recognition of her work.

Michel Gerits: “I am assistant coordinator of the department of design and build for the renewal of the public domain of the city of Antwerp and represent the generic knowledge domains: water, public lighting and domain issues. As an Architect and projectleader I recently realized the new lighting of the city center.”

Kazimierz Rabski has a PhD degree as a physical-geographer. He has been working in the nature conservation sector since 1989, including nearly 5 years as Director of one of the Polish National Parks (Słowiński NP). Since 2002 Kazimierz has been working as independent consultant and expert in many state and business bodies responsible for the sustainable development and nature management of coastal areas.

Anita Prosser was born and educated in the UK having spent her early years in West Africa. Following a degree in Botany and Zoology she worked in over 32 countries throughout the world. More recently Anita has spent time focusing on European funding both for transnational work, influencing EU on its Volunteering policy, and on the new EU growth funds for the UK and chairing the European funding network on behalf of NCVO.

Presentation by Nicole Nowicki. Download.
Title: Twinning of natural sites: towards a new Natura 2000 Framework? Summary: 30 years ago we were considering how to bring together nature conservation organisations from all over Europe and designed the first European Sites Twinning Programme. How did this programme come through and evolved? This story, which is in Eurosite’s DNA, will help us reflect on how to design a new Natura 2000 Twinning Framework and reply to the challenges faced to-day by Natura 2000.

Presentation by Patrick Nuvelstijn. Download.
Title: Twinning in times of trouble. Summary: Experiences of Natuurmonumenten on Twinning and vision for the future.

Presentation by Alec van Havre. Download.
Title: ELO and the ELO Pilot Twinning Project. Summary: Introduction of ELO, the European Landowners’ Organization and outline and lessons from the ELO pilot project on twinning.

Presentation by Michel Gerits. Download.
Title: Learned lessons twinning Copenhagen-Antwerp April 2016. Summary: In April 2016 we attended the twinning sessions between Copenhagen and Antwerp on the theme of climate change, in particular the water issue. In this presentation I zoom in on my experiences about the trip and the meeting itself and try to propose a number of improvements.

Presentation by Kazimierz Rabski. Download.
Title: The touch of twinning. Summary: Showcasing twinning between Society for the Coast, Poland and Natuurmonumenten, Netherlands and sharing lessons learnt.

Presentation by Wouter van Steenis. Download.
Title: Tiengemeten and Ile Nouvelle – a Twinning of estuary islands changing into nature. Summary: Tiengemeten is an island in the Haringvliet, South of Rotterdam. The island has been in agricultural use for almost 200 years. In 2007 it is, after ten years of preparations, restored to natural estuarine habitat. In the same time, the Ille Nouvelle, in the Garonne estuary near Bordeaux, is also changed from agricultural land into estuarine nature area. We had a Twinning for 5 years to learn from each other and to get inspired by the other island. I will present both islands, the Twinning and lessons learned on Twinings in general.