Skip to content
Join us
Home » Events » Webinar: “LIFE: Stepping up to save bugs”

Webinar: “LIFE: Stepping up to save bugs” 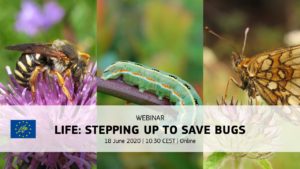 Invertebrates provide vital ecosystem services such as pollination, soil creation and water filtration. Yet despite their importance, invertebrate populations are rapidly declining across Europe due to loss of natural habitats, agricultural intensification, pollution, pesticide use, invasive alien species and climate change.

Between 1992 and 2018, the LIFE programme supported 237 projects on invertebrates listed in Annex II and Annex IV of the Habitats Directive. Since 2014 the LIFE programme opened also to invertebrate species listed as threatened in the IUCN European Red Lists. There are already examples of LIFE projects where invertebrates’ habitats were improved, individual species showing recovery and more knowledge gained of the life histories and requirements of species. More needs to be done still to build on this work to protect European threatened invertebrates, especially in grassland habitats, woodlands and wooded meadows and freshwater habitats.

In 2020 as well as in the following years, the LIFE programme hopes to receive more applications for funding on invertebrate conservation, including those implementing the EU Pollinators Initiative.

This webinar will therefore:

– Present the findings of the ex-post study of 20 LIFE projects on invertebrates, including recommendations for future projects

We invite participants from NGOs, research organisations, public authorities, and conservation bodies keen to better understand LIFE funding opportunities on invertebrates, as well as beneficiaries from current or previous LIFE projects on invertebrates to join us.