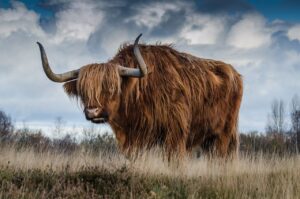 The Eurosite Agriculture, Biodiversity, and Climate Working Group (ABCWG) happily invites you to a webinar about re-wilding farmland on Wednesday 29 June 2022 from 15:00-16:30 CET.

Re-wilding, or giving land used by humans back to nature, with natural cycles allowed to develop at liberty, has become a hot topic in recent years. It is likely to heat up further. Nature restoration is moving up the policy ladder (witness the draft EU Nature Restoration Regulation). Some countries with intensive and economically successful farming sectors, such as the Netherlands, have already converted large tracts of farmland to natural habitats. In other countries, the opposite happens – they have large areas where agriculture is winding down, farmland is abandoned and rural communities are depopulating. Nature is taking over almost by default. Obviously, farmers and conservation practitioners may have quite different views about these trends, notably when working land is bought and tenancies cancelled in order to make space for nature.

The upcoming webinar will therefore look at three examples of how farming and re-wilding interact:

The first, from the South of Chile, is an example where former farmland is given back to nature and from then on, human impact is kept as close to zero as possible and nature restoration activities are developed. From ‘ager’ to ‘silva’, literally. John Whitelaw and Elena Sobakina will show the private (meaning “personal”) Pichimahuida project in Patagonia. The devastation of the original ancient forest ecosystem by clearing fires in the 1930s, followed by overgrazing by introduced sheep farming led to brutal soil and land degradation beyond its carrying capacity. Collapse of any farming opportunities provided for a feasibility to restore indigenous habitats of the site, and gave chances of re-wilding by native animal and plant species. A large native forest restoration programme, complemented by long-term legal protection, was set up and has proven to be quite successful. The land is adjacent to a national park, which has impacts (positive and negative) on the project. Any paradise has its serpents: there are problems with the uncontrollably developing tourism and lack of law enforcement around the protected area. Nevertheless, by applying the philosophy of giving natural processes free rein and respecting Nature’s rights, the project is seeing a wilderness full of iconic species.

The second is an example where re-wilding is combined with very extensive farming. The Knepp Estate in south-east England has given up its past intensive arable and dairy farming, and re-wilded large tracts as wetlands and woodlands. However, farming activities are still taking place, producing 70-odd tonnes of grass-fed meat every year from free-roaming livestock. The livestock acts as megaherbivores, creating and maintaining habitat diversity in the landscape just as  the Pleistocene wildlife once did. There is no supplementary feeding nor human intervention, other than when absolutely necessary. Russ Carrington from the Knepp Estate will explain in more detail and present the latest project,  a regenerative farming venture to create nature corridors, linking the original rewilded land and other wildlife habitats in the vicinity, whilst producing food for a new farm shop and café. The purpose is to demonstrate how rewilding and regenerative agriculture can work together. A key focus will be on the improvement of soil health.

Taking the soil aspect a step further, the third presentation, by Stanzi Litjens, uses Portugal’s Coa Valley as a case study for re-wilded land as carbon sink generating income from carbon credits. In this area, land abandonment and rural depopulation is accelerating. Even the remaining farms face an uncertain future. Left to itself, land reverts to scrub and then dry forest, being at great risk of wildfires. Soil is often depleted and degraded from past use. Stanzi’s research for the Rewilding Europe Grazelife project pointed to a better alternative. Grass in combination with natural grazers and dung beetles is very efficient in storing carbon in plant cover and soil. Turning Coa Valley land into grassland mosaics thus has the potential to substantially increase soil organic matter, with far lower risk of fires releasing carbon back into the atmosphere. Backed up by quantified calculations of carbon storage and market value, the presentation will indicate how offering such re-wilded farmland to the carbon market may bring surprisingly high income to the landowners.

To join the webinar, please see the link under the heading ‘registration’.

Last year, various Eurosite members expressed the need for a place to exchange knowledge and experience on biodiversity conservation in relation to agriculture. Therefore, it was decided to establish a working group on the topic in the beginning of 2021, because biodiversity on farmland and nature-inclusive agricultural business models are becoming more and more relevant topics in the conservation field. The group is chaired by the very experienced Anton Gazenbeek. Please contact Harm Schoten in case you wish to join this working group.

Joining the webinar does not require registration. You can join via the below Zoom link: