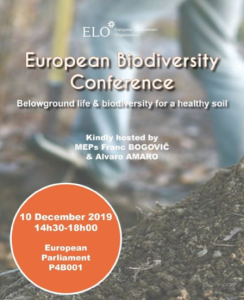 On the 10th of December, the day before the Green Deal was presented to the European Parliament, Eurosite attended the biodiversity conference “belowground life & biodiversity for a healthy soil” where green NGOs, farmers, policy makers, researchers and companies got together to discuss this important topic. The event was organised by the ELO – European Landowners’ Organisation, and covered an afternoon of talks about the importance of soil health and biodiversity.

The main message of the day was that our soils are under threat and more needs to be done to prevent further degradation and to restore our soils. While this was agreed upon in every talk, each speaker presented their own interesting perspective on the issue of soil degradation.

After a short welcome by Frans Bogoviç, Alain Scriban (Special Adviser, ELO) opened the day by stressing the importance of healthy soils for agricultural activity and other ecosystem services. Anne Burill (Acting Head of Unit – LIFE Nature) followed by talking about the EU role in biodiversity governance, the Green Deal and the EU Biodiversity Strategy which will be presented in the coming months. Gerard Govers (KU LEUVEN), keynote speaker, then discussed soil biodiversity, and “why we need to think big for a small world”. He discussed the links between above- and belowground biodiversity, agricultural yields and briefly touched the land sparing and land sharing debate.

One of the important messages here was that establishment and reinforcement of alliances with the civil society organisations and with the private sector will be key in safeguarding the health of our soils and therefore also of safeguarding our biodiversity as a whole. As the European Land Conservation Network, Eurosite plans to take up an active role in making such partnerships effective.

Following the keynote speaker, three panel sessions were held. The first panel session consisted of a talk about Carbon Farming by Christine Müller (Policy Officer, DG Climate Action – Land Use and Innovation Finance). Topics touched were carbon farming as a biodiversity driver, carbon farming schemes and credits and the role of agriculture. Galina Peycheva-Mitev (Farmer, Bulgaria) then clearly and passionately elaborated on her perspective on sustainable soil management and how she restored the soils on her family farm through already available tools. The talk provided a nice on-the-ground perspective in between the talks on policy and research.

The second panel session talks were held by Celia Nyssens from the EEB who talked about what farmers and policy makers can do to protect their soils. Andrea Vettori (Land Use and Management Unit, DG Environment) then reiterated the need for a change in mindset for soil protection; recognising soil as an important, living and functioning system and the important contributions healthy soils make to the SDGs and in linking climate and biodiversity issues. Ronald Vargas (Secretary of the Global Soil Partnership) talked about world-wide soil degradation and the costs that come with it. Furthermore, while the topic of reduced yields was brought up in relation to more soil-friendly agriculture several times, Vargas put forward that “we need to look not only at the yield, but also at the quality. We need to find a balance between quality and quantity.” His conclusions were that we need to move soil biodiversity from science to practice and develop and invest in coherent and feasible policies towards healthy soils.

The last two talks of the day were given by Koen van Keer (Yara International) and Maaike Perneel (Ghent University – Cropfit). Van Keer mainly discussed our changing view on soils and that we need to measure and evaluate the health of our soils. Perneel brought in a new perspective by discussing their research network’s work on plant biostimulants and their potential for soil health. At the end of the last panel session, Alvaro Amaro ended the day with positive, summarising words on the current political ambition regarding the Green Deal and that we can be optimistic about synergies between the political sphere and the private actors, followed by the inspiring quote “If you want to go quickly, go alone. If you want to go far, go together. Let’s go far!”.

If you are interested in the details of all presentations from the event, the slides are now available through the ELO’s website.