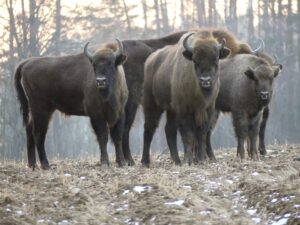 Rewilding is an increasingly used management intervention for natural sites and it is getting more and more attention in the media. This month two interesting articles were published in The Guardian: “Landscape of fear: what a mass of rotting reindeer carcasses taught scientists” and “Wild bison to return to UK for first time in 6,000 years”.

“Landscape of fear”: what a mass of rotting reindeer carcasses taught scientists

On a remote Norwegian plateau, 323 reindeers were killed by lightning. Whereas due to European law, such carcasses would have to be removed, in Norway the park decided to leave them and let nature take its course. This gave scientists the opportunity to study decomposition and its effects on the arctic tundra system. Read more about the discoveries here.

Wild bison to return to UK for first time in 6,000 years

For the first time in 6,000 years, a herd of wild bison will be released in the UK. The event is planned for spring 2022 in Kent and will both help secure the future of these endangered species, as well as create a healthy, mixed ecosystem. You can read more about the project here.