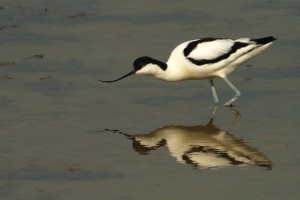 Millions of waterbirds fly between Europe and Africa each year, in search of food and breeding sites. These waterbirds depend on a network of healthy wetlands along their migration routes. Wetlands are also an importance source of livelihoods for local communities. Wetlands International works to ensure that these networks of wetlands remain intact, both for waterbirds and people. To this end, Wetlands International, along with a consortium of partners, has launched a new four-year initiative to assess the vulnerability of critical wetland sites to climate change.

Wetlands International CEO Jane Madgwick stated: “Wetlands, fed by seasonal rains and rivers act as lifelines for waterbirds and people across the Sahel of Africa. They are vital oases and refuge points, in an otherwise vast, dry landscape. As pressures on these sites increase, due to climate change and human use, we aim to better safeguard them for the long term.”

As part of the initiative community-based restoration projects will also be carried out in Mali and Ethiopia. Mali’s Inner Niger Delta is the second largest floodplain wetland in Africa and an important site for migratory waterbirds. However, waterbirds, farmers, fishers and pastoralists in the delta region are increasingly affected by withdrawals of water further upstream that mean less and less water is reaching the delta. This is exacerbated by the impacts of climate change, including rising temperatures and the increasing frequency of droughts.

28 critical wetland sites have been identified in Ethiopia, half of which have been affected by unsustainable water management and population growth.

The pilot projects in these countries will serve as an example to other communities and governments by showcasing good practices for adapting to climate change and using wetlands sustainably.

Watch a short animated video explaining the approach of the initiative.